The ceremony was held atop level 45 of Fulton Lane, amid Melbourne’s amazing skyline of tall new buildings reflecting the city’s ever growing popularity and prosperity.

A Lion Dance greeted some 300 guests , including chiefs of the building and construction industry, selling agents and well-wishers.

Also present were many who had bought units at Fulton Lane and delighted that they could move in two months ahead of schedule.

The guests savoured delicious Malaysian, Greek and Down Under food, all cooked on the spot with a free flow of drinks.

Musicians from the nearby Queen Victoria Market lent a carnival and cheerful atmosphere to the event.

Voon said he was a happy man as all of the Malaysian company’s projects in Melbourne had been an outstanding successes.

A large number of SP Setia’s officials, including its Acting Deputy President Datuk C J Khor, flew in from Kuala Lumpur for the occasion.

As a gesture of appreciation, all guests received a herb plant, adding to S P Setia’s green credentials. 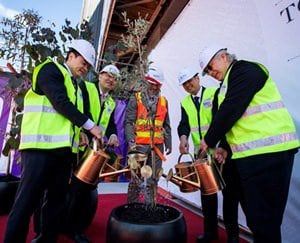