Featured in Urban Melbourne: Fulton Lane on show during Topping Out

In excess of 100 guests gathered earlier this week at the Fulton Lane construction site to witness the project’s topping out ceremony. In a sign of Malaysian-based developer SP Setia’s propensity to be seen to be proactive, the sizeable crowd amassed for what is generally only a builders tradition which sees a juvenile tree placed atop of the newly completed concrete structure.

But on this occasion in a very public ceremony three separate trees of Australian, Malaysian and Greek origins were hoisted by tower crane to meet waiting key members of the developer/build team while guests were treated to a hawker-style market arrangement at ground level. The Australian eucalypt reflects Fulton Lane’s location, while Malaysian and Greek trees provided a nod to the heritage of both developer and head contractor, Hickory Group.

On show during the event was the rudimentary ground floor layout; while many finishes have yet to be applied the basic premise of the space was evident. Sitting at the base of the dual towers containing 816 residential apartments, retail will take centre stage once complete, encouraging activity to Franklin Street in particular which is best described as ancillary to Melbourne’s streetscape at best.

Currently the largest residential project under construction in Melbourne and with a construction value of $221 million, the design is the work of architecture firm Fender Katsalidis. Perhaps Fulton Lane’s highlight is the rapidly emerging exterior façade which is a contrast of black glazing accentuated by angular aluminium composite panel clad that changes colour from green to yellow to silver depending upon the viewer’s angle.

Closer to street level podium to both residential towers are heavy with timber and a green arbor façades, providing a more engaging interface with the streetscape.

According to Hickory Group highlights of the Fulton Lane build include:

While Urban Melbourne hopes to tour Fulton Lane when complete – which is expected during June 2015 – SP Setia have just signed off on a construction contract for their latest Melbourne development titled Parque Melbourne at 555 St Kilda Road. Hickory Group have snared the build once more for the curvaceous tower which is also designed by Fender Katsalidis.

In complete contrast to Fulton Lane’s angular design, the flowing lines of Parque signifies a step-up in presence for SP Setia in Melbourne, with the St. Kilda Road development billed as one of Melbourne most prestigious.

But as for SP Setia’s entry project into Australia, no doubt the 1500 future residents of Fulton Lane will like what they see. 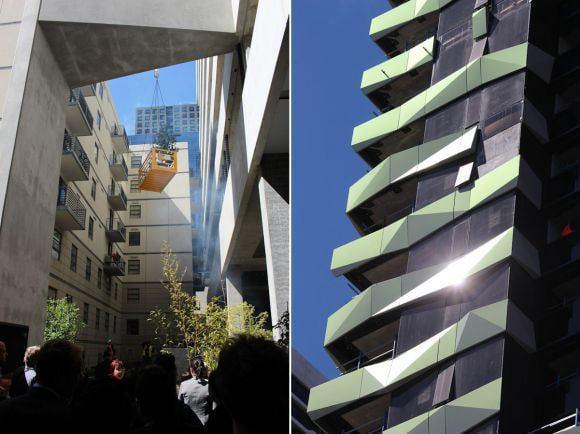