The Melbourne skyline will be distinctly more Manhattan-esque from 2018 when Collins House, one of the world’s slimmest towers, is completed by Jeff Xu’s Golden Age Group.

Construction will begin in March with prefabrication specialist Hickory Group appointed to build the 57-level glass and steel skyscraper, that will soar almost 200 metres above the Makers Mark building at 466 Collins Street, a 483-square-metre site that’s just 12 metres wide.

Collins House, set to also be the tallest residential building in the Melbourne CBD, will be the slimmest tower in Australia and the fourth slimmest in the world, according to its developer – though given the site is narrow but also long, will look more like a slender glass eraser than a traditional pencil tower, which is narrow on all four sides.

Currently, the title of slimmest tower in the world is claimed by Highcliff tower in Hong Kong with a height to width ratio of 20:1, though the most iconic pencil tower is undoubtedly 432 Park Avenue in Manhattan, rising up almost 400 metres with a 379-sq-m condominium on each of its 84 floors and built at a cost of $US1.25 billion.

"As the population grows, traffic worsens and Melbourne’s CBD continues to develop, it is inevitable we will start to see Manhattan-style living – where people work, live and play in the same urban neighbourhood," Mr Xu said.

But, he said, a project like Collins House would be not possible under the interim planning controls introduced by Victorian Planning Minister Richard Wynne in September last year.

Mr Xu acquired the site, with a permit, from Lorenz Grollo’s Equiset Group in 2014 for $25 million. A year later, he brought in the Deague family’s Asian Pacific Group as co-investors on the $200 million project.

The tower is almost sold out with just a handful of the 263 luxury apartments in the Bates Smart-designed tower unsold. Chinese-born Mr Xu said local buyers accounted for 50 per cent of the purchasers.

Michael Argyrou, co-founder of Hickory Group, said the project would incorporate many structural elements built off site, which would greatly reduce the construction cost.

"Collins House utilises engineering methods rarely seen in Australia, but ones that are common overseas in cities such as New York," said Kristen Whittle, a director at Bates Smart.

"The narrow site required a rethinking of the structure of tall buildings. Through an inventive structural system, combined with cutting-edge construction techniques, we have reinvented the tall tower. From a technical viewpoint it is at the limits of current construction technologies available today. 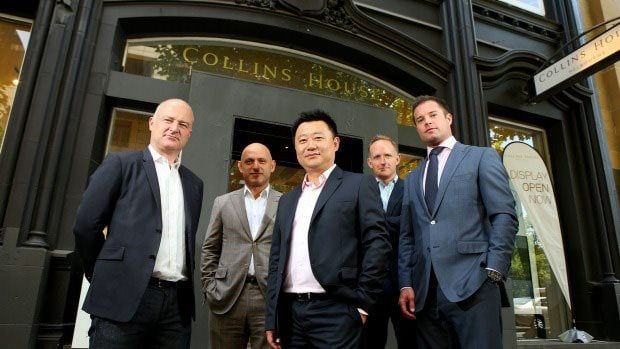