The last of 90 prefabricated structural units was installed on site on April 19, meaning the hotel has now “topped out” at 17 levels.  Only interior fit out works are still to be completed and the hotel will open in the second half of this year.

Hickory’s patented building system utilises prefabricated elements including modular bathrooms, pre-attached facades and precast concrete panels.  The method adopts a conventional steel frame construction approach but allows the different components of the building to be configured independently of each other, maximising productivity.

For example, the 120 bathrooms were manufactured to completion in Hickory’s Melbourne SYNC bathroom factory whilst the structure of the building was assembled in a factory in Perth and in-ground building work up to level 1 was performed on the Wellington Street site.

Prefabricated components were then assembled and stacked via crane on site over the course of 10 weeks.  By comparison a conventional building method would take approximately 5 months longer to achieve the same construction milestone.

Once complete the 4.5 star hotel will comprise 120 rooms, function facilities, a ground floor lobby and restaurant area along with pedestrian arcade along Shafto Lane.

This is the first Australian project using this building method to reach full height.  The system is also being used on a new 42 level tower project in Melbourne that will top out mid-year. 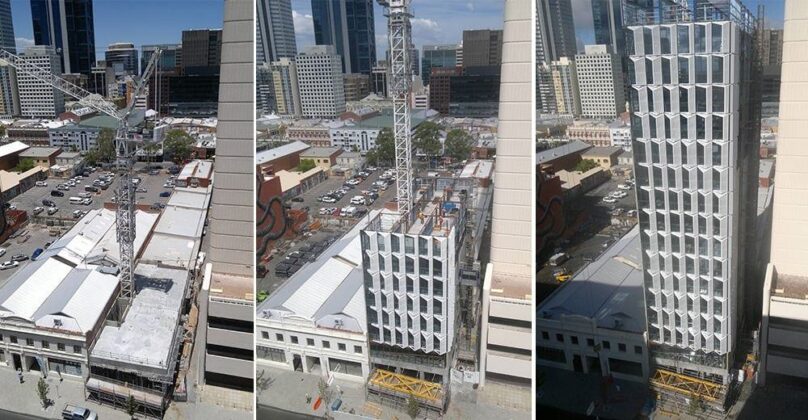