Hickory Managing Director Michael Argyrou said, “With this project we have proven that there are faster, safer and less disruptive ways to build. This represents the cutting-edge of innovation in the construction industry.

“We hope the success of this tower will lead to more widespread adoption of our building method.  This would have widespread benefits for the environment, workers and consumers, while underpinning the creation of exciting new opportunities for the Victorian property and construction industry”.

Hickory’s construction method uses prefabricated building elements including modular bathroom pods, precast concrete slabs and pre-attached windows.   All structural elements on the La Trobe Tower project have now been trucked to site and craned into place, meaning that the building has “topped out” at its final height. Only interior fit out works remain to be completed.

The development of Hickory’s new building system involved a substantial manufacturing investment into their Brooklyn factory, with financial support from the Commonwealth Government under the Manufacturing Transition Programme. The Victorian State Government’s Department of Economic Development also provided investment assistance to develop the modular bathroom pods that are used within the building.

This manufacturing investment has created employment opportunities for automotive sector personnel to transition into the construction industry. Several ex GM Holden employees worked on the design and manufacturing of the building.

Hickory installed much of the high-rise structure during extended hours construction shifts, trucking in the oversized prefabricated components at night to avoid disrupting tram and vehicle traffic on La Trobe Street.  A quiet electric crane and strict noise control measures were put in place and monitored throughout the 8 month night work period to ensure neighbouring residents were not disturbed by the activity.

La Trobe Tower is the tallest building in Australia to use prefabricated construction methods. Hickory estimate using their new structural building system has allowed the project to be completed more than 8 months early.

“We hope the success of this tower will lead to more widespread adoption of our fast-track building method and provide a best-practice benchmark for future high-rise developments to follow” Mr Argyrou said. 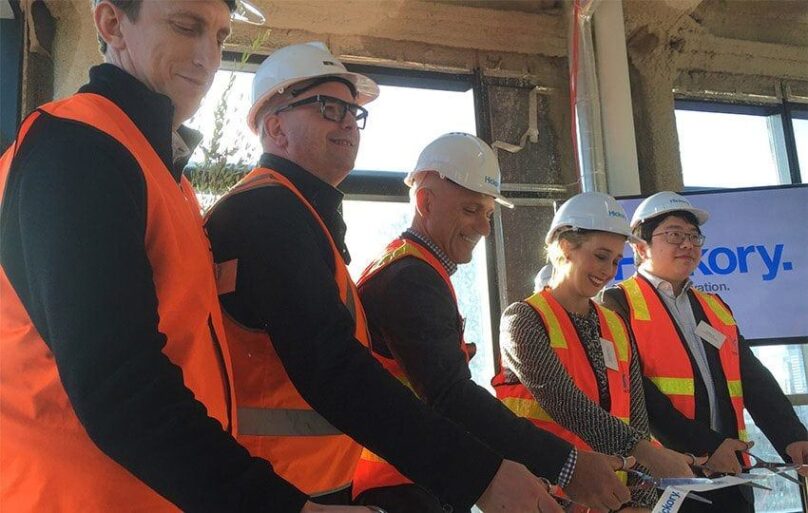