Featured in Urban Melbourne: Up Close with the Hickory Building System

Guided through the active construction site by Hickory Joint Managing Director George Argyrou and Site Manager Ben Turner, Urban Melbourne was afforded full access to the budding residential tower which will be the first of many utilising Hickory Building Systems (HBS).

Asked who was the main driving force behind HBS, George Argyrou unashamedly described the method as his ‘baby’. After exploring the merits of Unitised Building with projects such as Little Hero and One9 Apartments, Hickory found unitised construction to have limitations in both application and delivery.

While effective in low-rise scenarios, Unitised Building was not directly applicable to high-rise towers or buildings with curtain glazed facades. George Argyrou explained that Hickory as a true builder maintains an intrinsic interest in innovative construction solutions with time, cost, sustainability and quality at the forefront of their thoughts.

Thus Hickory Building Systems was born with the intent of creating a fast and effective construction delivery method using a more conventional on site approach, with tall structures specifically in mind. This was shown to be the case with the La Trobe Tower construction contract secured principally upon the time savings associated with HBS.

The process begins within Hickory’s offsite facility where individual structural units are created beginning with an engineered concrete floor. Thereafter the slab is turned with load bearing steel columns, fully fitted wet areas and a building façade applied over and within the steel frame.

Rather than the one-size-fits all approach of traditional modular approaches, HBS uses interchangeable, scalable componentry used in conventional projects and assembles theses elements in an innovative way. Using Hickory’s established construction resources including formwork, façades, joinery and bathroom pods has enabled HBS to outshine traditional structural construction in terms of accuracy and quality with build tolerances brought down to within millimetres.

Trucked to site, the structural units are lifted into place and locked together by a team of riggers dedicated solely to this task. Seven structural units constitute one floor on this particular project, with the largest central unit spanning the girth of La Trobe Tower.

In layman’s terms once the structural units are locked together to create a completed floor, further units can be stacked above owing to the inherent strength of each HBS unit. Visually this presents as ‘pancaked’ concrete floors atop one another with a maze of vertical steel reinforcing between each floor.

These vertical reinforced steel cages are dropped in order to tie in with those of the previous floor. When joined the reinforced cages are subsequently shotcreted to create a traditional concrete floor and column structure, yet in a much quicker timeframe and at a lighter weight; without compromising structural integrity.

Additionally the pre-attached façade enables fit-out to progress almost immediately after installation. Factor in the preconstructed bathroom pods within each dwelling and typical construction time of a project of La Trobe Tower’s size can be up to 60% faster.

With a condensed construction time frame and the majority of deliveries running to a tight evening schedule, Ben Turner explained that the implementation of HBS is very much an exercise in time management and communication.

After initial discussions with Melbourne City Council, noise and traffic were identified as areas of concern. To counter this Hickory have employed a Titan Cranes electric luffing tower crane that has considerably less noise output than a typical diesel-powered unit.

In addition noise measuring equipment which has been fitted to surrounding buildings has shown that noise levels are below initial benchmarks set by both Hickory and Melbourne City Council.

HBS unit delivery is a task in itself, with Hickory liaising with both VicRoads and Yarra Trams on any given evening where components are being craned into position. Initially constrained to three nights per week, Hickory hope to move oversize HBS deliveries to five nights per week, thus in theory allowing five floors to be added to La Trobe Tower per week.

After initial apprehensions, council are now at the point where they’ve requested that all site deliveries are done so during evening hours. This permit was granted following extensive community consultation and acoustic validation by Hickory and opens up new opportunities for construction in the city.

Can this methodology enable more quiet construction to be done after hours and accelerate the completion of building projects in the city?

There has been a high concentration of construction activity in this small pocket of La Trobe Street in recent years, impacting businesses and neighbouring residents. Hickory are monitoring the success of after hours works closely on the La Trobe Tower project, as this model may well provide a long-term solution to easing construction congestion by cutting months off each construction program.

Underlining the potential of HBS, the day of Urban Melbourne’s visit to La Trobe Tower also happened to be the day that Hickory signed off on the construction contract for their next HBS project, Collins House.

On a mere 465sqm site, the Bates Smart-designed Collins House will rise 57 levels or near on 200 metres above ground. With its super slim profile and extensive glazed facade, Collins House is very much the tower project Hickory had in mind when conceiving HBS.

Construction of Collins House is expected to begin in shortly. 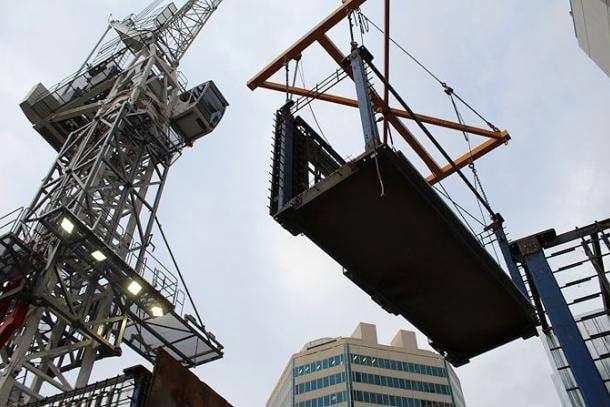