A private investor has snapped up a suite of groundfloor shops in the soon to be complete 568 Collins Street apartment tower.

The $9 million deal for five shops covering 450 square metres was negotiated soon after the builder, Hickory Group, topped out the 68level skyscraper.

It underscores a resurgence in the city’s west end retail where all new space in two major tower developments between King and Spencer streets has either been sold or leased.

The tower attracted attention when Hickory revealed most of the structure’s 800 bathrooms were prefabricated in its Brooklyn factory complete with fittings, tiles and plumbing before being dropped in on site, saving an estimated 30 per cent in costs.

The sale of the Collins Street shopfronts follows a successful leasing campaign for "The Grid": 13 new retail spaces at the base of the Investa Office Fund and Investa Commercial Property Fund’s new tower on the other side of Collins Street at number 567.

Leasing agent Cam Taranto said two of the tenancies at 568 Collins were under offer.

Mr Wolman said the tower included 10 levels of strata office space which was being offered to the market.

"We are witnessing a spike in demand from businesses who want to purchase and own their premises rather than lease," he said. 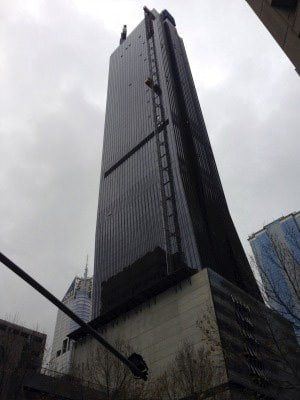