Featured in The Australian: Prefab, modular and sustainable homes

Image: From the factory floor to a finished home in just eight days: Tektum modular home

REDUNDANT car industry engineers, designers and managers have recently found new job opportunities at the cutting edge of a revolution in building and construction.

About 20 of these highly skilled workers have been employed by the Melbourne-based Hickory Group to work on the design and manufacture of prefabricated (prefab) commercial buildings, as well as components that go into conventional builds.

Australia lags behind other industrial countries in the use of prefab and modular construction though these techniques offer numerous advantages. Not only is the build time halved and the cost reduced, this factory-based approach to construction allows buildings to be installed in locations where construction workers are hard to find. And that means industrial jobs in cities and regional centres for workers affected by economic restructuring.

Hickory Group has so far completed 16 prefab builds, including office towers, hotels and even a hospital over the past seven years. Some have been as tall as nine storeys, including a Perth public housing project that was completed in just 10 days.

It’s now begun making prefab bathrooms that have been sold to other developers and slotted into apartment buildings all over Sydney and Melbourne. In one of Hickory’s own projects in Collins Street, Melbourne, it produced more than 700 bathrooms for the 65-storey building.

The benefits of prefab and modular construction are compelling, but not everyone gets it. The federal government’s industry “growth centre” agenda, which targets five key sectors based on advice from McKinsey and the Business Council, doesn’t mention this industry.

But Industry Minister Ian Macfarlane, who saw one of Hickory’s Melbourne buildings this month, told The Australian that the technique presented an “exciting prospect”. Innovation in industry and the application of new technology and its effect on the workforce have been at the heart of the Powering Australia series this year.

Macfarlane met with Hickory’s joint managing director Michael Argyrou, who told him how former car industry designers and engineers were highly skilled at finishing products to a very high standard. Macfarlane’s views about prefab were reinforced last week when executives from South Korean steel giant Posco told him they were developing their prefab capacity.

Argyrou said the Victorian government had been very supportive of its strategy. He said former car industry managers and designers were in fact better at precision-oriented work than people with a construction industry background. “They add an enormous amount of value to our business; they are much better at it than what a construction guy would be,” he said. Their skills were “very transferable” and the company planned to integrate them into the business through the prefab components production and then “slowly adjust them to the construction industry”.

Hickory had about 75 workers at its Footscray plant and was looking to growing the business to around 200 workers over the next two years.

Modular construction differs from prefab in that the building usually comes in a steel container. Over the past two weeks a modular home manufactured in Geelong and Mittagong has been assembled on a Sydney clifftop in the space of just eight days.

The design by Sydney-based Tektum was built in the factory, loaded into a container and then unfolded and assembled on site at Bilgola Plateau.

Tektum’s co-founder Nicolas Perren said the company was applying car manufacturing techniques to home and building construction. But unlike many modular homes, the high-quality finish led most people to conclude that it was a conventional build.

“Few of the visitors believe that it has been transported on a standard truck and unfolded on site with bathrooms and kitchen in place. All of them leave convinced this is the future of construction,” Perren said. Tektum has also built a residential facility for disabled people in Wodonga and is now chasing about a dozen new projects in Australia and New Zealand. These include a childcare centre, remote clinics in Queensland, a golf resort in NSW, community halls and a 300-500 house development in Christchurch.

Curtin University’s Jemma Green, whose research is focused on sustainable housing, is impressed with Tektum’s design and says modular housing is a much more efficient and cost-effective construction method. She said the shorter build time meant significant savings for investors and a much higher rate of return. There was less waste involved in the manufacturing process and the buildings also delivered better energy use. “Building conventionally is so disruptive in a city. It is disruptive for the community, on the roads. Modular is a more rapid response to a demand that exists,” said Green, a former investment banker with JPMorgan.

But Green was highly critical of the inflexible approach taken by banks which often refused to finance these builds simply because construction was taking place in a factory rather than on site.

The owner of the Bilgola Plateau home, who asked not to be named, said modular approach was better suited to the steep slope of the block because the container was dropped by a crane straight onto the steel sub-frame and then unpacked.

But he admitted there was a perception problem. “A home is a big-ticket item. People think of it as a low-quality house compared to a custom build. It is a perception,” he said. 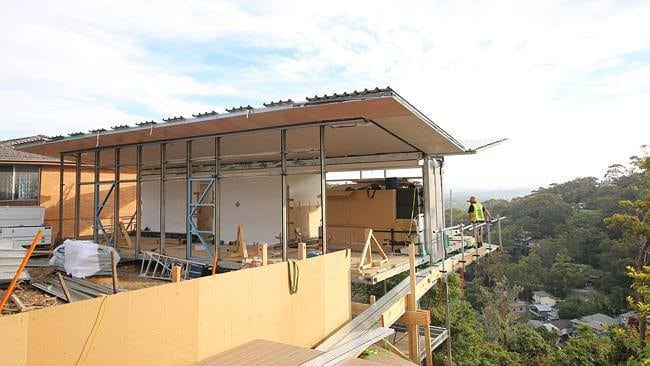