Featured in AMT Magazine: Hickory Group – Building for the future

Hickory Group delivers innovative, high-quality products by combining decades of experience in construction with sophisticated manufacturing techniques. At a time when many Australian manufacturers are struggling, this is a company bucking the trend, and creating opportunities for the entire industry.

Taking a tour of Hickory Group’s factory in Brooklyn (Victoria), it seems on many levels much like any other production line. Raw materials go in at the start – sheet-metal is roll-formed and welded together; components are installed; everything is finished, cleaned, quality-checked – and out of the other end come completed products. The difference is that what come out are not, for example, coffee machines, computers or cars. What come out are entire rooms.

At any given point along the production line, work might be in progress on a hotel suite, a hospital ward, or a kitchen/lounge for a luxury apartment. Each module goes from being a simple steel box – four walls, a roof and a floor – through a comprehensive fit-out process, stage by stage. Access routes for services such as plumbing or electrics are established, windows are fitted, interior tiling and exterior cladding are set in place, even baths and washbasins are installed – everything including the kitchen sink. Finally it’s wrapped, ready for delivery.

“It’s not too dissimilar a process from any manufactured goods,” says Hickory’s CEO George Konstandakos. “You do the design and engineering up front, then build a prototype, a pre-production version of a module, and have the client sign off on the quality and fit and fitness of that module.”

As the modules reach the end of the production line, they are loaded onto trucks and transported to a building site, where they are stacked together to form a building. It might be an apartment block, a school learning centre or an aged care home. A larger module being assembled during AMT’s visit comprised two individual hospital wards separated by a central hallway, each fully fitted out with its own ensuite bathroom. Such flexibility and versatility are among the key benefits Hickory can offer – both in terms of potential real-world applications, and in meeting the expectations and preferences of the client.

In addition, the Hickory Building System delivers higher quality and precision because so much work is undertaken in a clean, controlled factory environment rather than on-site. The columns that are crucial to the modules’ structure are manufactured to tolerances of one millimetre, a precision that would normally be unheard of in construction. The modules come with a 50-year structural warranty, same as any conventional building, and are built to withstand the harshest environments.

“We’re building in South Hedland, the toughest cyclone region in Australia,” says Konstandakos. “Our modules are designed for 300km/hour winds. We fully warrant them and back their design and engineering.”

Hickory’s approach also offers time-savings of up to 50% compared with traditional building methods, because work can be conducted simultaneously at the factory and the building site – in turn minimising local disruption around the building project. In addition, it is more environmentally friendly, with steel favoured over concrete, a more general use of materials that are lighter, less carbon-intensive and more easily recyclable, reduced water and energy usage, and less waste.

“We employ all the learnings from building a one-off module, so when we start volume production we’ve found out all the issues and problems,” adds Konstandakos. “You don’t have the luxury to do that on a building site, you sort of resolve problems as you go along, but here we have an opportunity to learn from building one module. And once we’re happy with that, we roll out volume production.”

An evolving hybrid
Hickory Group was founded 21 years ago by George and Michael Argyrou, who remain in place as the group’s Managing Directors. The company started off as a conventional construction business, building townhouses and apartments, and recorded steady growth, gradually taking on high-rise residential towers and major commercial projects.

Around five years ago the company began its evolution into modular construction, entering a joint venture with leading architect Nonda Katsalidis. It was Katsalidis who developed and designed Unitised Building, a unique column system that enables the modules to be stacked together.

Today, according to Konstandakos, Hickory’s modular division is the leading modular construction manufacturer in Australia. Staff numbers have expanded to around 70 full-time personnel. Working alongside them on-site are a rolling workforce of some 100 subcontractors who are brought in according to the specific demands of each project. Hickory has longstanding relationships with reliable local tradesmen who it can call upon when required.

“Labourers, boilermakers, plumbers, electricians, cabinetmakers, waterproofers… we subbie out a lot of work,” says Konstandakos. “It’s a hybrid between manufacturing and building, so we need good builders as well, but we also need good manufacturing people. It’s all locally made, from local materials. We support a lot of suppliers and a lot of industry in and around Melbourne.”

Projected turnover for this financial year is around $50m, and Hickory aims to double that to $100m per annum in the coming years, increasing production volumes and introducing efficiencies. The factory currently turns out two modules a day, and the company intends to increase that amount to four.

New products are in development, as well as streamlining of manufacturing processes. The modules are currently welded together, requiring skilled boilermakers and unique roll-formed components, but Hickory is exploring ways to move towards structural steel that can be bolted together. This would take a lot of complexity out of the system, and would also support Hickory’s ambitions of extending skywards. Its tallest building to date topped out at nine floors, but the current system is capable of being employed on buildings up to 70 storeys.

“We’re looking for taller buildings,” says Konstandakos. “It’s where you get the efficiencies in modular, doing a long run of modules. It’s where we’re striving to be, taking on some towers.”

There are challenges, not least in getting the message across that Hickory’s products represent a proven, viable alternative. In Australia, modular construction is still seen as an experimental technology, and Konstandakos is keen to overturn that perception among the general public, the industry, and crucially, financiers, who often shy away from anything that’s different or unique.

“If you look at the smarts we put into these buildings, we have professional engineering groups, we have university fellows involved in testing and validating our system. In some parts of Europe like Sweden, modular construction is more than 50% of all buildings. In Australia it’s tiny, probably less than 5%. We want to be seen as a mainstream alternative to normal standard construction of buildings.”

Given the current climate in Australia, where a shortage of affordable housing is fuelling an increasingly overheated property boom, and an ever-growing urban sprawl highlights the need for high-density inner-city housing, it seems likely Hickory might be onto something.

“The cost of construction goes up every year,” says Konstandakos. “There’s an industry crying out for improved sustainability and efficiencies, and manufacturing is a method where you can rope in those costs. It brings in efficiencies in volume, standardised practices, it’s all in a controlled environment. The cost of housing goes up every year and here’s a technology that can provide for reducing those costs.”

A new home for manufacturing
An intriguing aspect of Hickory is the number of staff on its payroll who came across from jobs in the automotive sector, including the General Manager for the Sync arm of the business, a Production Manager, and several engineers and CAD designers. Over the last six months at least ten further staff have been brought over from the car industry. Indeed, Konstandakos, who took his current role only last year, had previously spent 18 years in engineering at GM Holden.

“There’s a lot of value-add through the skills automotive personnel bring to this business,” he explains. “We have a strong focus on design and engineering in this business. It’s designed for manufacturing and assembly. That’s really the practices we bring in from the automotive industry, that you design it so everything just clips together, it’s all fit for purpose, and you minimise downtime.

“The automotive industry is used to working on very slim margins. Efficiency comes naturally to them – you’ve got to take every cent out of every component. That sort of thinking in this business means we’re able to improve our efficiency.”

The impending departures of the three remaining car companies in Australia have left a lot of their workers and suppliers facing an uncertain future. The news has also prompted a mass of speculation about where Australian manufacturing can go once the automotive industry has gone. What Hickory is doing might well help to answer those questions.

“There’s a lot of manufacturing expertise in Victoria,” says Konstandakos. “And with Holden, Ford and Toyota all closing their doors in the next few years, there is a lot of skill there. We’ll be looking for people with those type of skills.

“It’s opportunities for suppliers as well. We have a different model to conventional building, we’re feeding a production line. We need good-quality components, and we need parts to arrive just in time. We’ve struggled to get the supply base that understands what we’re doing. There’s a lot of Mum-and-Dad businesses that have been feeding Ford, Toyota and Holden that could potentially move across.”

It might not entirely fill the void left by automotive, but Hickory at least presents an area of opportunity at a time of adversity for Australian manufacturing. More importantly, it provides a fine example of how, with ingenuity and innovation, the industry might build itself a future.

“If we get behind it, now is the time to really accelerate this side of the industry,” adds Konstandakos. “We need another big manufacturing sector that’s got lots of opportunities and good growth, and this is one.” 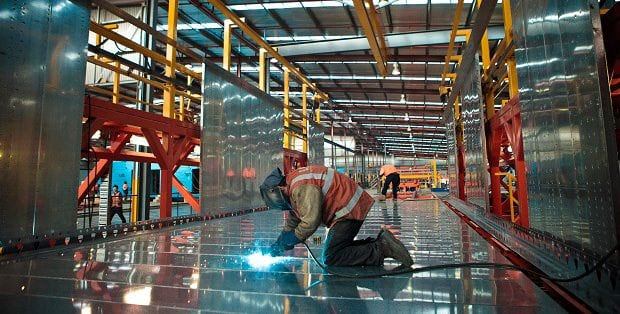