Featured in the AFR: Prefab smarts gain edge over rivals

Local prefabricated home builders are ramping up their operations to benefit from the billions of dollars worth of new resources projects being launched around Australia.

The scale of development, coupled with union pressure on resources companies to improve the standard of living for miners, has drawn interest from local and offshore builders keen to take advantage of the massive demand for accommodation.

However, niche local companies believe they hold a competitive advantage against the offshore builders and are taking on the sector’s local big guns like Hutchinson Builders, which turned over $380 million of prefab product last year.

“It is a real shame,” Mr Argyrou said. “As Australians, we are losing opportunities every inch of the way to benefit out of this mining boom.

“We are competing against overseas companies and we have to match the price. We think we can do it because we hope we prove ourselves smarter than the overseas markets.”

The “smarts” Mr Argyrou is talking about are based at a factory in the industrial ring of Melbourne’s west. This is the home of Unitised Building, which uses a method of putting together prefab housing devised by architect Nonda Katsalidis.

Unitised Building and Hickory have a joint venture company, UB Australia. It has captured the attention of the property industry with an eye-catching, eight-storey building, Little Heroe, on a CBD laneway, using the Unitised Building technology.

The production rate is being ramped up, with the factory being retooled so an increasing amount of the work is automated.

Originally it took 60 days to manufacture a pre-fab unit. Under the revamped system, that time will be cut to seven days.

It is expected 150 people will staff the factory as its production grows.

“It’s a massive leap forward in the production cycle,” Mr Argyrou said. “The box is welded together by machines; the whole structure is created by machines, and all the components get put into place by automated machines.

Hickory is in talks with a number of Pilbara mining companies for projects. It is targeting mining hubs such as Port Hedland, Newman, Tom Price, Paraburdoo, Karratha and Dampier.

In Gladstone, Builtsmart Modular Homes has just completed 300 prefabricated rooms for accommodation provider Maroon Group, all of which have been manufactured in the company’s factories in Gosford and Kuringgai, NSW.

It has been contracted to build another 2000 rooms in Gladstone. General manager Nick Reynolds said he was overcoming the threat from cheaper offshore product.

He said the advantage he had was in resource companies’ desire for high-quality product.

“Everyone we talk to is shy of going overseas to get the cheap product because of the union pressure and government pressure to have better living conditions for workers and so that’s actually good for us,” Mr Reynolds said.

“The unions are saying you can’t just put [workers] in a container anymore and the councils agree with them because they don’t want to just see cities of dongas.”

The higher margins sought by offshore groups – following years of market domination – were also making them less competitive against the domestic players such as Builtsmart, he said.

“We have also learned to build the higher-quality residential products in our factories while a lot of our competitors are steel-shed builders who are finding it hard to lift the quality,” he said. 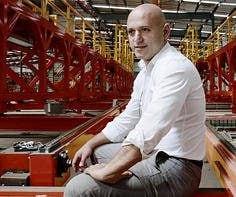