La Trobe Tower is a 43 level residential tower in central Melbourne by developers Longriver Investments with design by architects Rothelowman and Management by Sinclair Brook.

The building aesthetic pays homage to the precinct’s musical heritage, with the glass façade punctuated by fin details inspired by a tuning fork and piano keys. A common area on level 15 provides spaces for resident interaction and features a lounge, outdoor terrace, kitchenette and gymnasium.

Floor to ceiling windows allow light and city views to permeate the 206 luxury one and two bedroom apartments, which are fitted with warm timber finishes and clean, modern joinery.

A FASTER WAY TO BUILD

Hickory’s approach to building the La Trobe project was to strategically integrate prefabricated elements in order to overcome limited site access and a small site footprint.

The building method utilised on La Trobe involves conventional construction of the building to level 2, with the remaining levels of the building structure (floors, columns, bathrooms and building façade) built off site in Hickory’s Brooklyn factory and delivered to La Trobe Street as a series of prefabricated structural units and precast concrete panels.

Each floor generally comprises 4 oversize units, 4 smaller units, modular bathroom pods and several large precast concrete panels.  All of these structural elements and materials are commonly prefabricated on conventional sites, but on La Trobe Tower are assembled in an innovative way that has allowed the high-rise building to be built faster, more safely and with less community disruption

Currently the high-rise project is installing 2 complete floors of structure (with pre-attached façade) per week and is tracking well ahead of the 19-month contract program. Comparatively a conventional approach would have required an approximately 26-month program.

At the time of contract award, La Trobe Street was heavily congested with construction.  2 residential towers had recently finished, a 40 level building was going up next door, a student accommodation project had just completed across the road and another large-scale tower had commenced a few doors down. Receiving an approved traffic management plan for Hickory to start building was also complicated by the fact that the site next door had been granted a permit to occupy the loading zone in front of the La Trobe tower site, limiting space for deliveries.

In order to reach a solution that would work for all parties, Hickory investigated completing some quiet installation work of prefabricated components during an extended after hours shift. This would be limited to delivering and lifting structural units and precast panels using an electric crane. Acoustic experts and the Victorian State Government were called in to assist with validating the construction plans and facilitating community meetings in order to reach a workable solution.

Following extensive community consultation, thorough construction modelling and meetings with Melbourne City Council and road authorities including Bicycles Victoria and Yarra Trams, Hickory’s building method was further refined to reduce neighbour concerns.  This included moving the noisy alimak to within the building envelope, a key issue for nearby residents.

Hickory was initially awarded a short-term permit of 2 weeks to install units up until 12.30am Mon to Thurs and 1.30am Fridays (when trams ceased on La Trobe Street). The strict trial building permit was agreed upon to ensure Hickory could deliver on promises of noise mitigation and complaint handling.

To date the evening construction method has been very successful, with minimal disruption to the surrounding area, and Hickory’s permit to install during the evening was extended for the duration of the project.

Sound monitoring on site is being used to ensure building noise in the evening remains within the current ambient levels of the surrounding area, with results demonstrating that sound levels generally fall well below acoustic targets.

The successful development of a council-approved evening construction method has enabled Hickory to offer compressed timelines to clients for future projects. This has been backed by a feasibility study that indicates that running evening shifts has not impacted construction cost.

Discussion with experts at the University of Melbourne have examined the link between compressed construction, the urban housing shortage and apartment affordability.

Professor Tuan Ngo, Research Director of the ARC Centre for Advanced Manufacturing of Prefabricated Housing notes,  “Melbourne town planners have approved the construction of over 20,000 apartments that are likely to be built in the next four years. This is four times above the average annual construction level of 1,000 a year. The avoidable cost of congestion for the Australian capital cities is estimated to be around $16.5 billion for the 2015 financial year, having grown from about $12.8 billion for 2010. The congestion cost in Melbourne will rise from around $4.6 billion (2015) to between $7.6 and $10.2 billion (2030).”

Professor Ngo notes, “Construction vehicles account for a significant proportion of this congestion, and construction sites using conventional onsite methods suffer with poor reliability of deliveries. It has been estimated that the construction workforce spend 10-40% of their time dealing with ordering and transporting materials to where they are needed. Logistics professionals estimate that if transport and logistics were dealt with more efficiently, trades people would be free to concentrate on their core areas, reducing staff and material costs by 15%.”

Further study is planned to validate the resulting development savings in time and costs using Hickory’s after hours approach, as well as the further advantages to the community surrounding safety, noise and dust levels.

La Trobe Tower structure is currently well over halfway, and the 43 level building is expected to top out in June 2016. 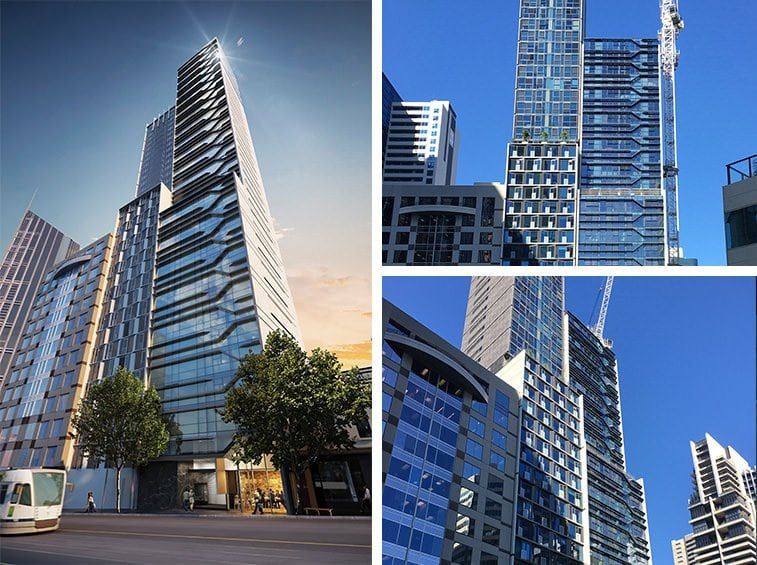