A new six-storey apartment complex in South Hedland has been completed in fewer than 10 days.

Hickory Group started work on the prefabricated apartments on May 5, and at the time of print was ahead of schedule and looking to finish on May 13.

Using an Australian-made building system, the 77 pre-finished apartments for Concorde South were delivered to South Hedland from the company’s Melbourne factory.

“(It) provides a real solution to the issues of quality, affordability, materials and skills shortages that often prevent regional development projects getting off the ground,” he said.

“Unlike imported modular construction products, the Hickory System is an Australian-made construction that does not have set sizes, building heights or layouts.

“We can adapt to complex architectural designs that make a positive contribution to the skyline whilst having a minimal impact on the environment.” Mr Argyrou said the Pilbara had been very supportive of the technology, which created construction opportunities in the region.

Town of Port Hedland Mayor Kelly Howlett said she was pleased to see the project going ahead.

“The Town is excited to see another transformation happening in South Hedland,” she said.

“Construction of the new apartments will only add to the amenity and vibrancy of the South Hedland Town Centre, helping us to achieve our vision of becoming a regional city.”

The Concorde South project is the latest development in the region for the company, which built five separate apartment buildings in the Pilbara last year.

The project is being delivered in partnership with developers Acier, Maximus Australasia and Gold Star Consulting, with Hedland First National appointed to sell the apartments. 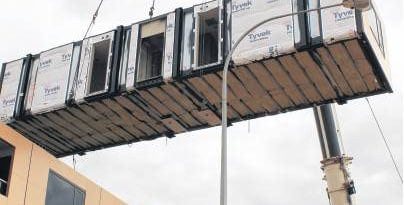