Featured in The Age: Building on modular approach

In a Brooklyn factory a 240-room hotel is rolling off the production line. The hotel’s rooms and adjoining corridors are modular in design. They start life at one end of the factory floor in Melbourne’s west on an automated machine that spot welds the 13.5 by 3.5-metre metal base to the walls and ceiling within four hours.

It’s all based on car manufacturing technology and welding techniques. As they progress, other components: lighting, plumbing, cyclone-proof shutters and spray-on insulation, are added.By the time they reach the end 15 days later, each room, complete with fixtures and fittings, is plastic wrapped and stacked ready for shipping to Port Hedland.

On site they will be dropped into place like Lego, with a one-millimetre factory-precision tolerance.The hotel is due to be completed by the end of this month for delivery via empty China-originated ships, but may be held up until next year by funding issues and northern Australia’s tropical cyclone season. A second stage of 130 hotel rooms is planned.The Unitised Building technology and factory is the brainchild of Melbourne architect Nonda Katsalidis.

Apart from the Pilbara hotel, the system has been used to make 425 apartments in four Melbourne apartment buildings, including the Nicholson in Brunswick and Little Hero in the city. Another small apartment for a site in Moonee Ponds is in the production pipeline.

But the company, now run as a joint-venture with one of Australia’s largest apartment builders the Hickory Group, was looking to expand beyond apartments and mining into education, aged and health care sectors, Unitised Building business manager Damien Crough said.

Hospital wards were similar in dimension and layout to hotel rooms and a good fit, he said."We’ve just put in a bid on a primary school in Canberra using our system."

UB was also specialising in modular bathrooms for Hickory’s development projects. Hickory intends to stop building bathrooms on site and use modular units with threaded joints on the base to attach wheels, which are rolled into the building and dropped into place."Our aim is to do 100 a week," Mr Crough said.

UB’s technology had halved build times, the focus now was to reduce costs, he said."We are trying to get more consistency into apartment types and more scale. If we can do that we can reduce costs and improve quality and sustainability," he said.

As a result, the company is backing an off-the-shelf, pre-designed, prefabricated apartment product called klik created by Elenberg Fraser architects.

The klik system will use factory-based manufacturing to build anything from houses to high-rise apartments and is expected to cut developers’ costs by up to 10 per cent.

The modular system can be used to create either square, linear, C-shape or L-shape building bases that can house up to 14 different one to three-bedroom apartment or hotel types.

"We see klik as being just as much a tool for architects as developers," Elenberg Fraser director Callum Fraser said.

"We believe there is a real desire in the housing industry for larger cheaper, multi-level apartments."Architects were looking for a systematised approach to construction, Mr Fraser said.

"Everything we do, we do from first principles, for the first time, every time. That is at odds with the way the world works."

"It’s a big change. To get there, what we need is volume," he said. 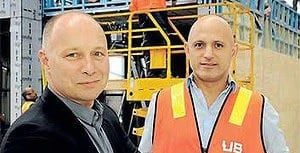