Featured in Architecture & Design: The prefabrication of modern bathrooms

Think of the riskiest room in the house being produced via computerised modelling, design and manufacture. It would be a process that eliminates excess trades, reduce on-site waste and control quality, finishes and costs. This is the basis for a recently launched system of prefabricated bathrooms, Sync.

"The bathroom is the most labour intensive room, with all the different trades making it the riskiest area for defects," says Nadia Salajic, executive support manager at the Hickory Group, which is behind the new Sync system.

UB Australia uses automotive CAD/CAM manufacturing technology, systems and processes which have been found to accelerate on-site and off-site construction programs by up to 50 per cent. It minimises material and energy waste, while improving product and system quality and safety.

A monocoque system, it is stackable without a secondary structure, with internal and external walls, and connecting columns made of steel, it is said to be up to 50 per cent lighter than a concrete structure and easier to transport.

Created by architect Nonda Katsalidis, Unitised Building and its methods have attracted attention since becoming operational in 2008. In Australia, UB is owned by residential construction firm The Hickory Group, a multi-unit builder founded in 1991 by fourth generation builders, Michael and George Argyrou, who are still joint managing directors.

Hickory’s range of projects include apartments, hotels, schools and electrical terminal stations, which use the UB system to make prefabricated structural sections. Housing in the Pilbara is another example where, in the coming months, the company will use a new logistics methodology to minimise the costs and energy use of transferring 53 apartment modules to Port Hedland and Karratha in Western Australia from the Hickory factory in Melbourne.

"Prefab has been around for decades," says Australian Institute of Architects CEO David Parken, "But what’s changing is the power of the computer in the programming, so we’re starting to see efficiencies that were really unimagined before. Building Information Modelling (BIM) can model spaces and construction drawings not just in 3D but so that the model knows exactly what material it is working with, what the tolerances are, and can then move into a manufacturing process in which computers can accurately cut, like in the motor vehicle world, and robots ultimately complete the assembly."

Comparing this "to the half a dozen or so different tradespeople involved in bathroom delivery working all over each other, having to take lifts 20-storeys in the air with a tool box and a few materials to apply on-site", Parken admits he was really stunned by his visit to the Hickory factory in Melbourne.

He went to look at the prefabricated module and system, which still confirmed the challenges of framing, finishes and fitting out multi-storey buildings, which are "four times more expensive than a single dwelling house in the suburbs". The major call-backs, Hickory found, are for balconies and bathrooms, shower failures and the like.

Hickory also counted the number of hours it takes to make a bathroom in-situ with various trades.

"The stud framer, the electrician, plumber, the tiler, the guy who puts the shower screen in and vanity – it just goes on and on and on," says Parken.

"If it takes 100 hours to do a traditional bathroom with all the different trades, Sync can build in 10 with computer models and machine-fabricated framing. It’s more efficient for them to be spending more on high quality, more durable and fit for purpose materials. The penny dropped for them that they can make a bathroom module and install it in any type of construction imaginable, followed by delivery of any product that basically needs water and power and you’re done, with everything – the wall tiling, ceiling, lights and finishes – in place."

Bathrooms feature in the modular housing of other companies, such as Queensland-based Project Modular, which uses BIM and also photo-realistic animation to produce virtual prototypes, and Podfirst, which uses Ritek XL wall building systems. Both have a background in remote housing, and promote the economic and sustainability benefits of prefabricated buildings.

Brad Thompson’s PreFab Bathrooms’ flat-packs come in standard sizes and two styles, although custom bathrooms can be made for large orders.

On the other hand, Nadia Salajic of Hickory says that Sync Bathrooms can accommodate more variety with architects’ and designers’ specifications in their plans, with Sync technology already being used in a lot of Hickory buildings.

"Pretty much any element of the Hickory modular or Sync Bathroom project can be negotiated. The whole idea is that the systems can be adapted to any architect’s vision, and it’s up to the architect to specify the preferred appliances or finishes," she says.

"The nominated builder will generally use their preferred suppliers and agreements to source that appliance or building material at the best possible rate. We manufacture the complete bathroom pod in the factory, for positioning on site with all of your electrical and plumbing connections, which can be made in under an hour, also fitted into the building site."

Salajic adds that streamlining the production process and reducing waste has allowed the company to produce with higher grade, beautiful materials.

For instance, Kerlite floor covering is a high grade pressed porcelain product from Italy. Only 3mm thick, with sizes from 49 x 1000mm upwards, it is frost, scratch, stain and graffiti resistant, Class 0 fire retardant, with water absorption less than 0.01 per cent.

There is also Microban for healthcare and hospitals, in which silver is built into the ceramic material of the tile during manufacturing to achieve an antibacterial efficacy of up to 99.9 per cent. This is exclusively available to Sync in Australia.

Sync Bathrooms was so new at the time of writing it was still building a website, but it has the capacity to manufacture 200 bathrooms per week according to project budget, design and specifications.

The three-step Sync process starts with consultation, design and prototyping. It goes on to manufacturing technology, which automatically produces a bill of materials from the specification. Manufacturing is to the schedule, with bathrooms fully finished, detailed and inspected on the factory floor. It is then packaged for transportation, and once on site, lifted and wheeled into position, with services then connected.

As to the future, although Livable Housing Australia (LHA) guidelines do not specifically reference prefabrication, its executive director Andrew Aitken says, that "there may be an opportunity to recognise prefabricated bathrooms as a product, and provide certification of products that meet the requirements of the Guidelines". Prefabricated bathrooms is especially suited to housing for the disabled and our ageing population where healthcare is important.

Manufacturers BPN spoke with did not indicate that they were factoring in anything special for prefabricated bathrooms at the moment, although Troy Creighton from Stormtech advised that the new Marc Newson designed MND65 Series grates can be prefabricated to custom lengths.

Salajic is excited by the possibilities of almost having a three-track program – on-site, prefabricated buildings and now bathrooms – with bathrooms being prefabricated while other interior work is finished.

For Parken, the main benefit that will excite architects and designers is the higher quality of material and finishes at a lower cost than the most basic bottom-end of market built today.

"It can keep quality within a fairly tight budget – and that’s the holy grail. It is like looking at the future right there in front of you." 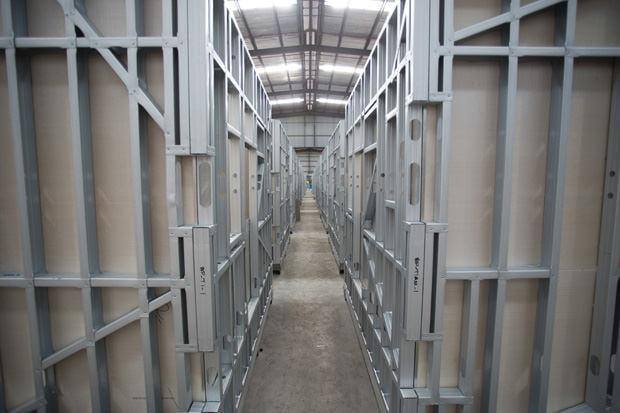