Featured by AAMC: A Game Changer in Building Construction

It might be the smallest room in a new apartment, but the bathroom can pose one of the largest risks to the construction process as any builder knows.

An Australian company, the Hickory Group, has found an unlikely solution in the automotive industry.

Hickory’s Sync Building Systems makes 3,000 high quality modular bathrooms a year in an offsite plant. These are simply installed and connected on delivery to a building site.

With repeat business from major builders such as Multiplex and John Holland, Sync sees enormous growth potential for their solutions, and expects to expand soon into pod kitchens.

“It’s just smarter and more efficient,” says Sync director of operations, Eddie Pallotta, who spent 16 years in Holden’s manufacturing, and is passionate about the opportunity for the automotive industry to transfer its under-utilised workforce to building “manufacturing”.

While modular solutions are not necessarily cheaper, the cost advantage comes from speeding up a whole project and allowing a developer to hand a building over earlier, reducing carrying costs.

“The fast-to-market advantages are there for the developer. It’s a better system,” Pallotta says.

“Sync gets 15 bathroom pods out a day. You’ve got to keep it moving, you can’t stop. That’s what a production line is about,” he says.

Pallotta regularly speaks in these car-industry terms, but goes on to say that the impracticality of importing pods made overseas means that, in this one instance, they are “not like a car.”

While modular construction technology has been utilised in Europe for many years, it is new to Australia’s more conservative construction industry.

Hickory Group is at the frontier of the pod technique, constructing whole modularised apartment buildings which are built in the factory and are then bolted together onsite, such as a 40 story building underway on Melbourne’s LaTrobe street.

“They’re not Lego blocks and they’re not shipping containers,” says Pallotta, pointing out the use of concrete floors and steel columns.

Hickory’s method also offers the advantage of being able to work at night, which doesn’t disrupt traffic, is quiet and does not raise the ire of nearby residents.

For the Sync bathroom area of the business, there is some equipment cost but the process requires fairly low capital investment, and it is really about processes and the systems, such as a design team which uses 3-D models.

“By no means are we producing a white Commodore. It’s very much mass customisation. There are no limitations,” Pallotta says.

Sync identifies water leaks as the biggest issue in regular building, and mitigates this by using a controlled manufacturing environment. The risks are very small compared to a conventional construction site.

Weight is not an issue, with the heaviest pod around 1,800 kilograms, while cranes regularly position precast concrete panels weighing up to eight tonnes.

The pods begin with a patented concrete base which is tiled, fitted with sanitary fixtures and hardware, and this is sent to the building site and craned in as an individual bathroom. The trades on site then make external connections to plumbing, ventilation and so on, and then the pod is plastered over like any regular subframing.

“It is seamless, you wouldn’t know it was made somewhere else,” says Pallotta. “This is a game changer.” 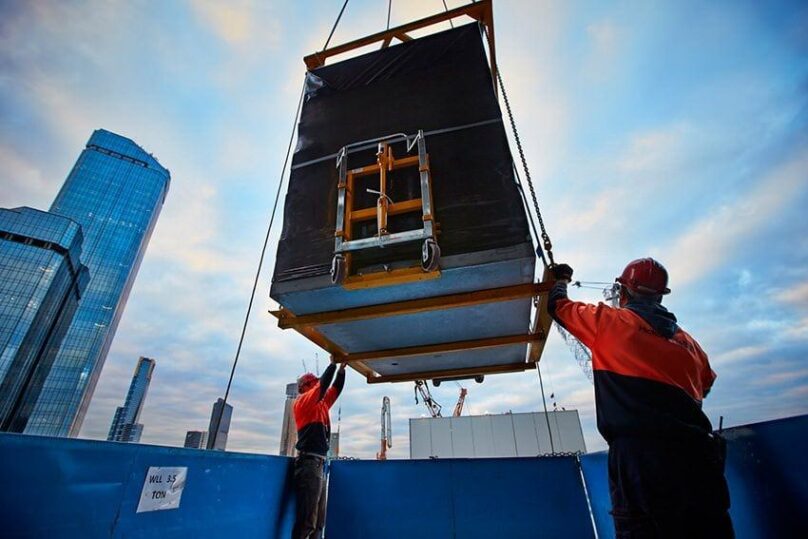