Featured in The Fifth Estate: Pre-fab housing for Little Hero, the Pilbara… maybe the world

He is also excited to be part of the solution for “real” housingin the mining hub of north-west of Australia, the Pilbara.

With a background in contract administration, project management and architectural detailing, he had a fortuitous chance meeting while working on a horse racing facility in Mt Eliza in 2007 with architect Nonda Katsalidis, who was also busy on the same property but on the domestic side of things.

The two got chatting and before long Damien had signed up with Unitised Building, and its director, Katsalidis, in a move to bring the “innovative construction technology” suitable for a wide variety of low, medium and high-rise residential, hotel, hospital and remote housing construction projects, to the market.

Their first project was the Little Hero development in Russell Place in Melbourne – where the eight-storey retail and residential building was erected in just four weeks. Damien took on the role of superintendent and also took on an apartment, where he and his wife have lived since 2010 – although he told The FifthEstate the arrival of a baby had made the living space a tad too small and they were reluctantly soon on the move.

Since then, with Damien as business development manager, Unitised Building has completed three other projects, The Nicholson in Coburg, Centvm Apartments in Preston and Pegasus Apartments in Mitchum.

Damien said the beauty of Unitised Building’s pre-fabricated construction was its lack of waste, fast build time, high quality product, 50-year design life, 20-year structural warranty and the ability to move and reuse the components. “It’s all done with 3D models which have all of the components needed and we can send those drawings off and have those components made efficiently and eliminate waste,” he said.

“They are pre-cut, pre-sized and there is no waste in putting them together. It’s not like a traditional building site where you have off-cuts, it is a much more efficient way of building.

“In Melbourne we have created 800 modules spanning four buildings and 425 apartments.”

But while Melbourne is home, Damien is most excited about the inroads the company is making in the west.

Unitised Building is in the process of creating a hotel in Port Hedland, which has already been snapped up by a major mining giant BHP on a five-year lease, and is keen to continue with further developments.

“We are starting to make real progress in the west. They currently (in the north-west) have substandard and high cost accommodation and we can offer high quality, sustainable, real buildings,” Damien said.

“Many of the companies also have issues because they can only build to two-storeys because of the cyclonic conditions, but we can engineer up to six-storeys.

“We also have a solution for camps which is much better than the donga style accommodation they have now.“

There is a lot of opportunity up there and it’s exciting to be part of the solution. We had Rio Tinto staff here last week and I told them there was an opportunity for all of us to make a difference.”

Damien said that while the construction industry had been through a tough year, pre-fabrication had also faced its own set of difficulties – from a perception it was substandard to funding from banks being hard to find.

“But I think people are seeing we are building real buildings and our product has had a good uptake,” he said. “

And we don’t have a lot of competitors in terms of what we can do with quality and height. There is a lot being bought in China but then they are limited in space and height because of the containers. And they are not able to finish them completely in the factory.“

And if we do have any issues, because we are in Australia, we can come and fix them.”

Damien said Unitised Building was very much a family-oriented business, employing about 100 staff, backed by a graduate development program offering mentoring, site tours, training and development and the opportunity to gain formal accreditation.

“We also recently picked up a few retrenched employees from the motorcar industry who we can use in manufacturing roles and we are also looking at more indigenous trainees, more women and older people who perhaps can’t work in traditional manufacturing.“

It’s just a really exciting time to be inthe industry and to be growing it in Australia and to be part of employing people and being a part of the solution.” 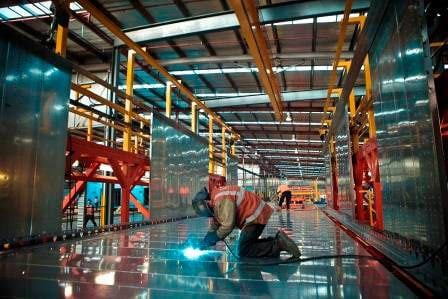